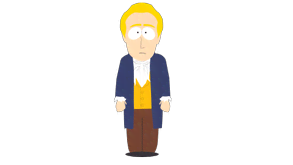 The holy prophet of the Mormon religion, Joseph Smith, Jr. was once a regular, optimistic and happy-go-lucky guy who lived in the holy land of Rochester, New York... until he was visited by an angel named Moroni and made miraculous contact with God and Jesus (much like the entire town of South Park today) and through a very complicated, confusing and possibly made-up story, started the Church of Jesus Christ of Latter-Day Saints, despite skeptics claiming he was conning people out of their time and money for glory. He tried to lead his people to the promised land but was shot and killed by an angry mob, and died as a human in Illinois, leaving Brigham Young to lead the Mormons to paradise.

Though he died as a human soul on Earth, Smith later became an immortal as one of the Super Best Friends, teaming up with other religious figures, including Jesus, Buddha, Muhammad and Lao-Tse, to keep the world safe. He also gained the super power is ice breath, which proved useful against the powerful Mecha-Streisand.

Hey, what's there to say? You're someone who leaves an impact. Some people, or "haters," take issue with your methods or truthfulness. But dammit, that comes with the territory of being a go-getter. People with Joseph Smith DNA are known to have their followers.

"It appears this David Blaine is as dangerous as you and your young friend had feared."